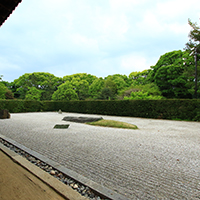 [Nationally designated important cultural property] At the end of Monzen-cho, the masterpiece of Unkei, the statue of Nio and giant Waraji sandals welcomes you to the magnificent appearance of a three-storied structure that is rare throughout the country. Along with the main hall, it was donated by the ISanuki feudal lord, Yorishige Matsudaira. * Image 1

According to the omens of Shidoji , Great King Enma (King of the Dead) of Shidoji is considered to be the same body as the eleven-faced Kannon of the main statue, with the appearance of the face of the eleven Buddha, and regarded as Enma of rebirth in paradise. The statue of the Great Demon King, enshrined in the Enmado, is said to have revived a nun named “Mia” in the middle of the Muromachi period. It is said that the face of Enma the Great looks like a scary face or a gentle face, depending on the spirit of the worshiper. * Image 2

History and origin of Shidoji

Shidoji is erected in the eastern part of Kagawa Prefecture, facing Shido Bay. Far beyond the sea, you can see the ridges of Yajima and Gokenzan. Founded in ancient times, by Empress Suiko in the 33rd year, (625) it is one of Shikoku’s most famous ancient temples. It is said that “Marine Divers Group”, (Oshisonoko), carved a spirit tree. It is said that the beginning of the carving of the Kannon statue and the construction of a sculpture hall, followed by the son of Fujiwara Kamatari, Fuwara Fujiwara, and the establishment of his wife’s tomb, which was named the “Death Dōjō”. In the era before his son, Emperor Jitou. in the 7th year, (693), expanded the temple with Gyoki and it flourished as an academic hall.

During the Muromachi period, it flourished with the contribution of Lord Hosokawa from the Shikoku territory, but it was devastated during the Sengoku period. Later, with the support of Suehiro Fujiwara and Omasaki Ikoma (serving Nobunaga and Hideyoshi during the Azuchi Momoyama period), it was revived by donation by Yoneshige Matsudaira, the feudal lord of Takamatsu. Shido is the hometown of the genius Hiraga Gennai in the Edo period, and there is a memorial nearby.

Niomon (National Important Cultural Property), Hondo, Honzon (National Important Cultural Property), Tomb of Ama (The stage of the tragic story of the Fujiwara family, which is also written in Noh, Fujima Fumasae is said to have been created for his mother. There are about 20 tombs. On July 16, the anniversary of the Ama, the “Shiroji Temple’s Sixteenth City” is held. We open the honzon of Kannon.

“Kensui-style garden” is a garden in the Muromachi period, and it has a strong stone structure that rises to the sky. The undyed garden built in front of the Shoin is a work of Sange Shigemori, which takes a typical Zen-style mountain landscape garden and makes it feel like Ryoanji of Kyoto. Free admission.