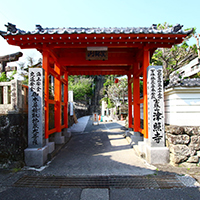 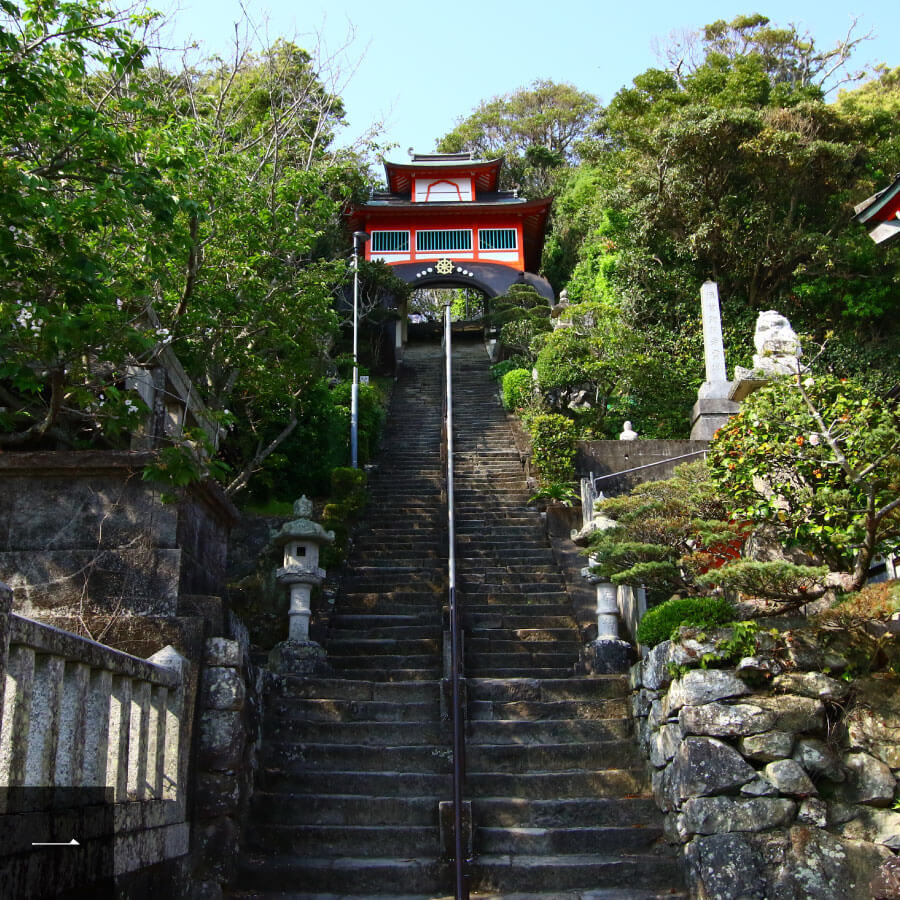 The main hall is enshrined on a small mountain in front of the approach to the temple. After passing through the vermillion gate, turn right and you will find Daishido, Nokyojo, and devotees hall. The stone stairs facing the main hall are as if going straight to the heavens, all are quite steep, use the middle handrail to go up, And on the way of the stone steps, the bell tower gate and Nio gate reminiscent of Ryugu Castle. The Pacific Ocean spreads out in front of the main hall when you climb the stone steps, below you can see the mouth of Murotsu River and Murotsu Port, and on the right you can see the 26th Kongochoji Temple in the gap between Gyodo Cape and the deep green.

Sights around the grounds 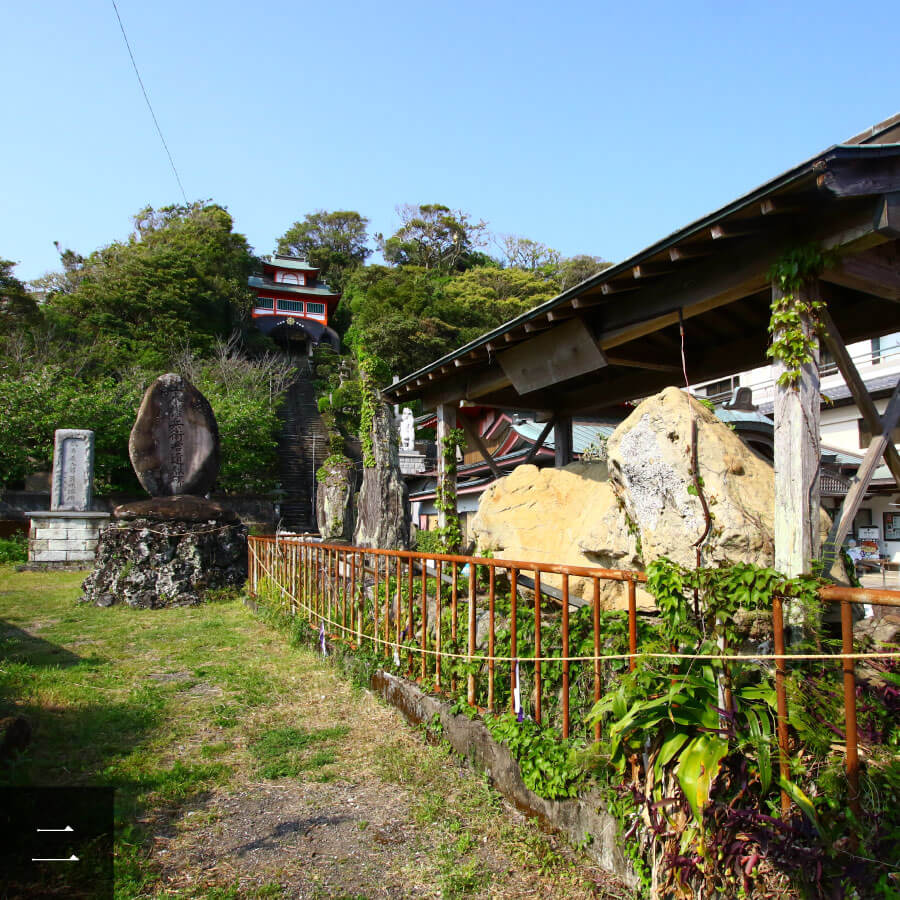 There is “kettle stone” related to Ichiki Gonbei on the left side of the approach, and there is Ichiki Shrine where the Murotsu port is refurbished at the Murotsu port. * Image 2

History and origin of Shinshoji

Shinshoji which stands on a hill overlooking Murotsu Port, is commonly known as “Shinshoji”. In the time of Kobo Daishi Kukai, the saint and guardian of Shikoku, from the place where the shape of the mountain resembles the jewel possessed by Jizo Bodhisattva, it is regarded as a spiritual site, and the Jizo Bodhisattva is carved by the master himself, and regarded as the principal deity.
In the beginning, the region received the protection of Chōsokabe and was called Tsuji Village, and had its height had more than seven towns. After Yamauchi entered the country, further lands of Ichimachi Gotanyo were donated, and all the temples were operated by the feudal clan. The grounds were once confiscated by the government or paid to peasant farmers, and the temple was abolished.
About 10 years after this devastation, the temple was finally allowed to be reconstructed. One corner of the storehouse was left as an elementary school at that time. Currently, the elementary school has been relocated, Daishido was built in 1963, and the main hall was newly built in 1950.

[The origin of Helmsman Jizo] The origin of “Long Life” Jizo is called “Kajitori Jizou”, In the fall of Keicho, the 7th year, when the first Yamauchi family, Kazutomo Ichitoyo was struck by a storm off of Muroto, a monk appeared from somewhere and took control of the boat, and the ship was able to safely enter the port of Muroto. The priest’s figure could not be seen, but when they looked around and visited the temple, they found that the body of the Jizo Bosatsu was wet and that the monk was a Honzon Jizo Bosatsu. The main priest is now known as Kajiri Jizo. This miraculous event is recorded in the “Kyuuki Minamijishi” historical chronicles.
Also, in the chronicle of the past and present, when the main temple of Tsuji suffered a fire for sixth time as written in the “Jizo Bodhisattva and the Dangerous Fire”, the Honzon Jizo Bodhisattva turned into a monk and alerted the villagers of the fire. There is a story that he escaped, and in the old days has has been called “catching fire” in the sense of preventing fire damage.

The highlights of Shinshoji

From the precincts and surroundings of the precincts, you can see Cape Gonto, Muroto Skyline, and the Pacific Ocean from the main hall.

* Vehicles are closed due to the replacement work of Ryoei Bridge over the Murodo Ukitsu Line.
Traffic restriction period: Until the end of March 2019 (planned)
Restricted traffic type: Vehicle closed (Pedestrian traffic allowed)