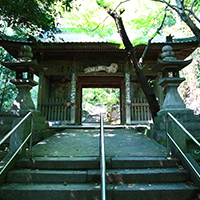 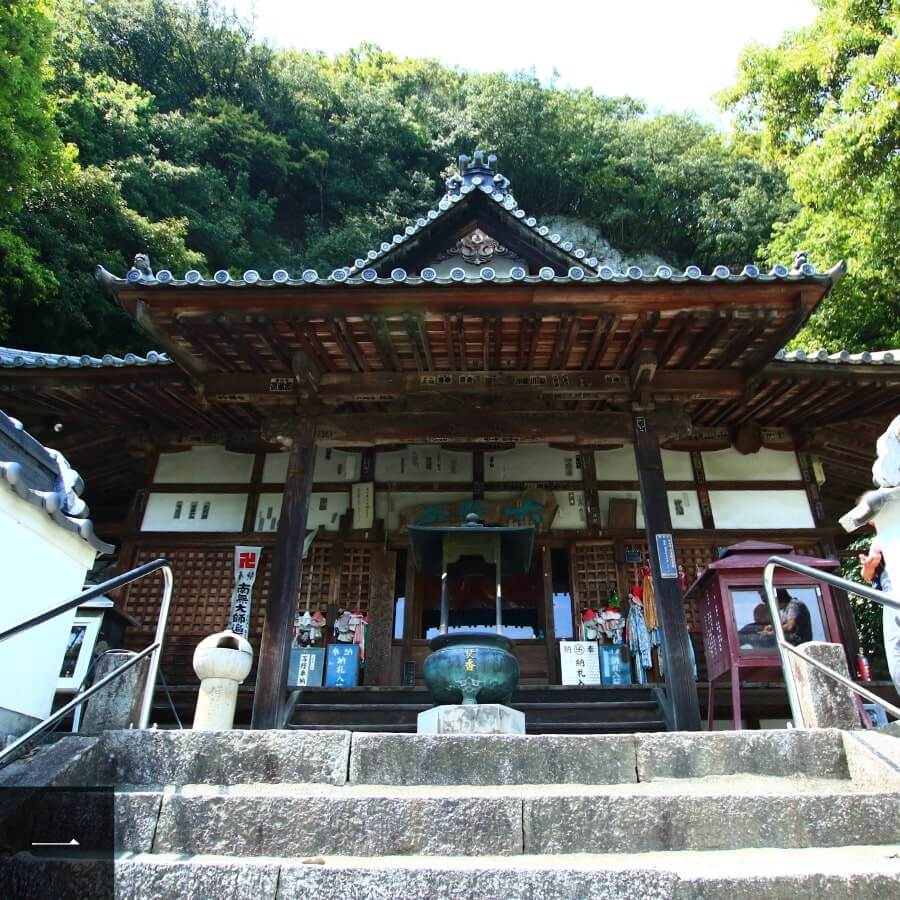 It is located 400 stone steps from the Niomon Gate (where the shuttle bus arrives). To the side of the stone steps you can find “Magai-butsu”, “Buddha engraved in the rock” are scattered throughout, and the interior of the temple, which is embedded into the rock, has a solemn atmosphere. After a further 140 steps, the main hall is found surrounded by rocky mountains.
Prior to the construction of the current main hall, Senju Kannon was enshrined in the rock cave behind the main hall, and the opening for Fudo Myoo and Bishamon (currently the opening is placed in Shishi no iwaya, “The Lion’s Cave”) was worshiped throughout Iwayama, “Stone Mountain”. From the main hall, you can look over the expanse of the Sanuki Plain. * Image 1 is the main hall

Guardian Lions of the Cave 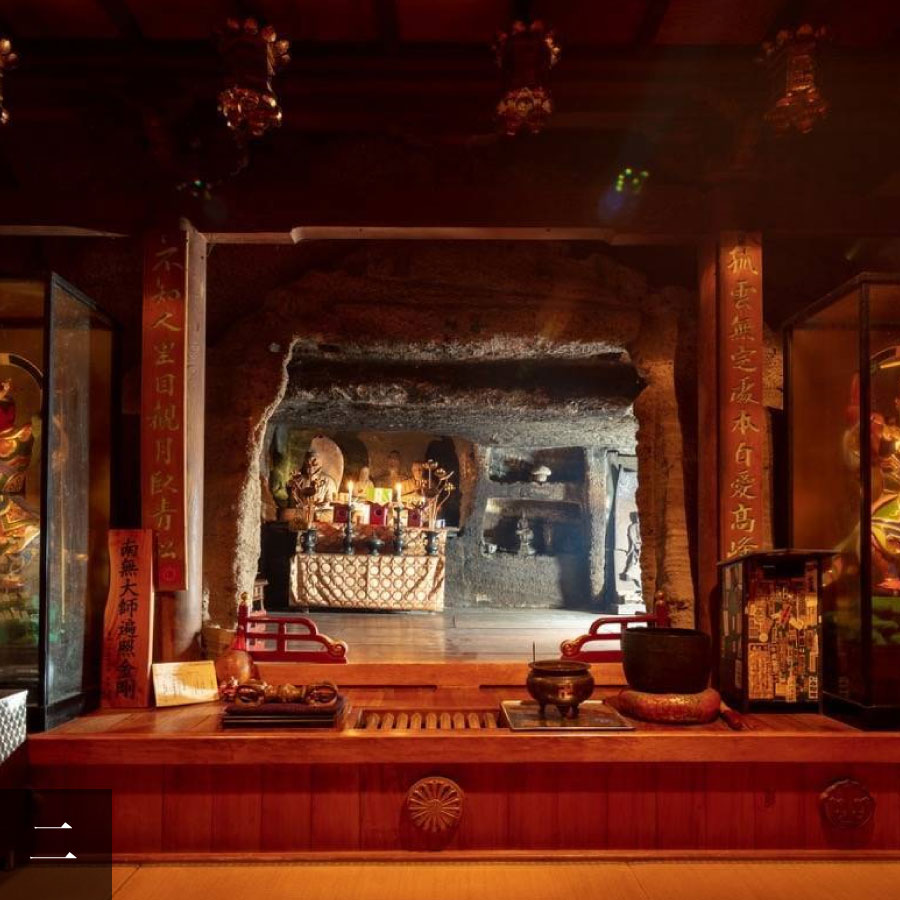 At the back of the Daishido, a rock cave was formed, as if a lion opened his mouth, Kobo Daishi worked hard in his studies, after returning from the Tang Dynasty, and was able to dedicate to the temple five treasure bells. In addition to the statue of Daishi, the father, the mother, and carved Buddha are enshrined. * Image 2 is in front of Daishido

The history and origin of Iyadaniji

Established about 1300 years ago. By the imperial edict of the 45th Emperor Shoumu. It is said that the foundation of the temple was founded by Gyoki Bodhisattva who built the temple, for the purposes of healing illness for Empress Kōmyō. In addition to the Avatamsaka Sutra, the temple treasure contains a holy scripture that was created around 724 in the Tenpyō era, and at least the temple was erected before 724. It is known that it was founded about 50-100 years before Daishi’s birth (774).

It is said that Mt. Iyadaniji, where Iyataniyama Temple is located, has been worshiped as a sacred mountain (Buddha’s Mountain) since ancient times, and is considered one of the three largest sacred sites in Japan. From ancient times, people believed that Buddha and God lived in the mountains, and that mountain was called the sacred mountains (called “Reihou”) and was believed to be the object of faith. It is said to be one of (Heijishinkou). According to the sacred mountain faith of Iyataniyama, “The cave beside the water place under the main hall is said to be the entrance to the gods and Buddha’s shrine. And there are innumerable doted places of “Magaibutsu” (Buddha) carved by students holding spiritual faith. In addition, such faith is still remains today, and a water ritual that cleans the trees with sacred water flows from the top of the mountain is religiously observed with the mantra called “Suikyogi” on paper thin pieces of wood. The water from the mountain flowing down from the summit washes clean these items.

It is said that Kobo Daishi was studying at Iwaya when was 9-12 years old.

Also, since the foundation of the temple, the cave at the back of this Iwaya is said to have been used as a repository for sutras and documents, and the Daishi took a sacred scriptures from this repository, and the light from the cave window (Window of the Morning Star), studying day and night It is said that from this light he was greatly encouraged.

Iwaya’s shape is called “Shishi no Iwaya” as it has the appearance of a lion roaring, and from the Buddhist faith that, “The lion’s roar is the same as the Buddha’s preaching”. Through reverent devotion and coming before this cave, it is said that by doing so, it is said that “The lion will eat all calamities and protect itself.”

Hora Jizouson (Jizo of the Cave)

Jizo is said to heal those who suffer from diseases that are above the neck. You can worship from the inside of Daishido on the way to “Shishi no Iwaya” (Lion’s Cave) You can sit down and look up 10 meters above the rock wall and see the figure.

Daishido Main Hall, Shishi no Iwaya, Maison Sanson Magaibutsu (It is said that Daishi was engraved on the rock wall on the way from Daishido to the main hall. It is said that you can

From Sanuki Toyonaka Interchange to Takamatsu City, take National Route 11 / Prefectural Route 48. Run along Fureai Park Mino’s sign, and there is a parking lot on the right.
⇒ Google map