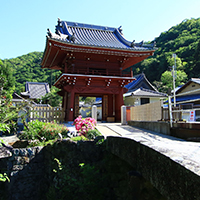 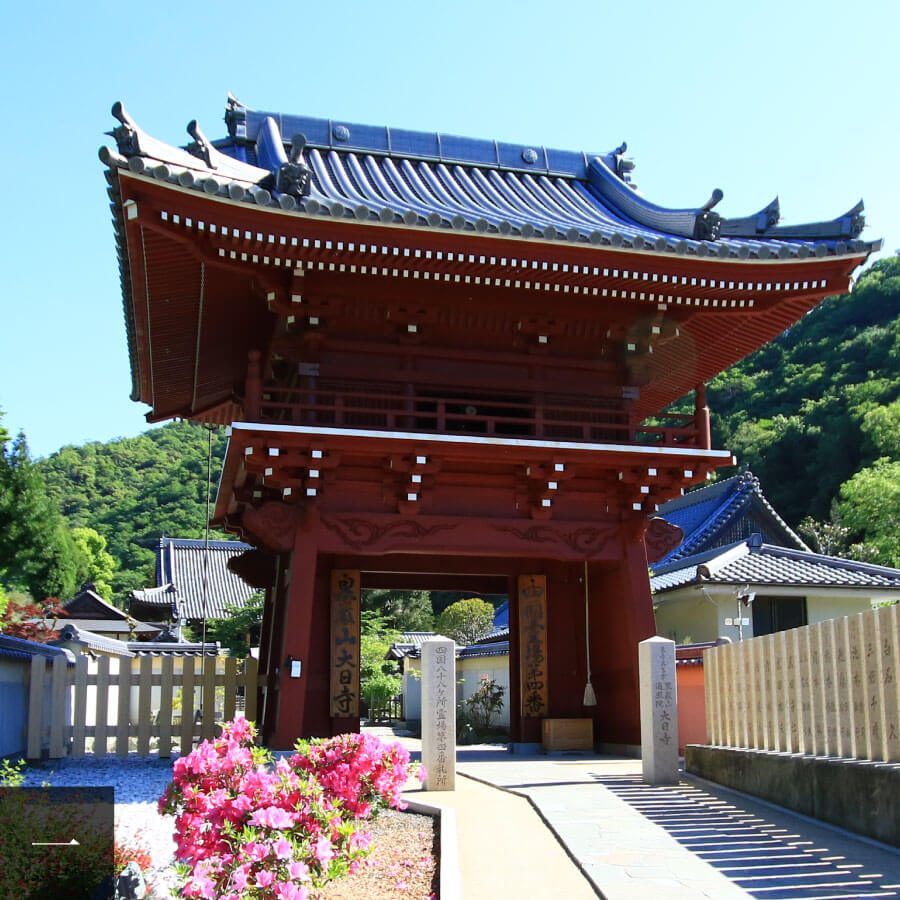 Located on the south side of the temple, is a two-layered bell tower gate with zelkova (red iron) coating. The roof is built with tiles, and the main building has a temple crest of Motoyama Toji. At the upper level, the temple bell at Maeyamamon (Bunkyuu Era 1861) was relocated.
(New reconstruction in AD 2018) * Image 1 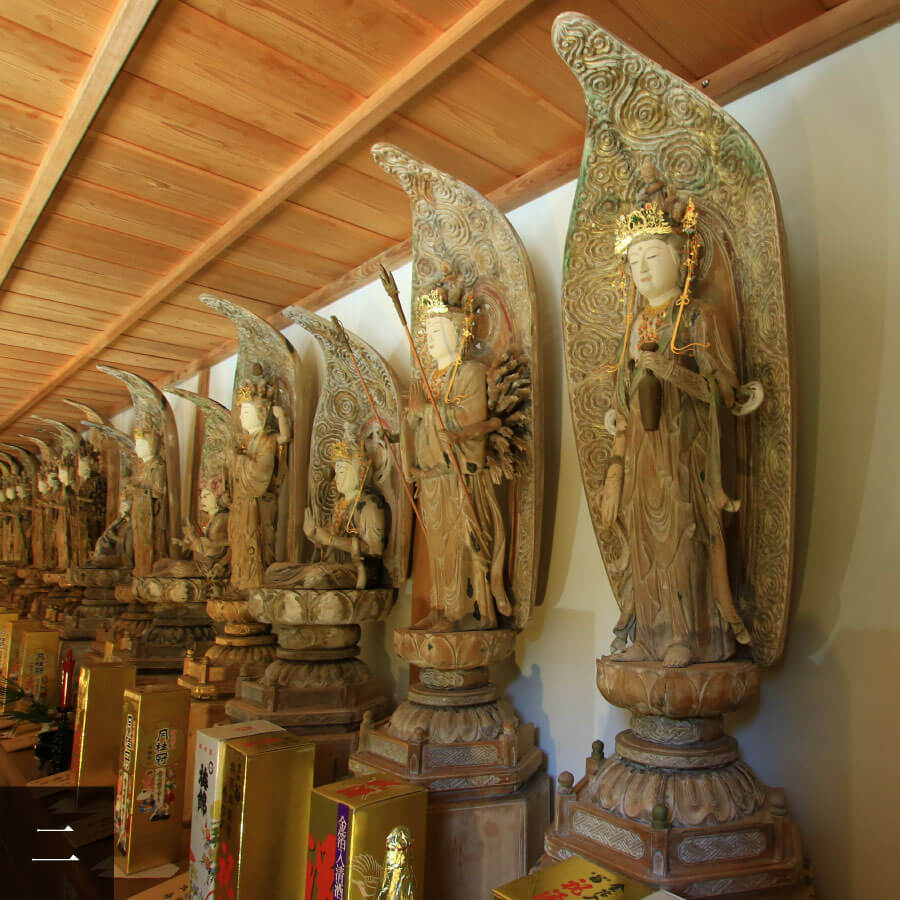 Statues related to the 33 Kannon sacred places in the West are enshrined here. It was built around the time of Kansei Era, year 2 (1790) and made possible by donations not only by the temple but also by believers from all over western Japan. (End of Heisei period restoration) * Image 2

History and origin of Dainichi

On the gentle slope of the ridge at an altitude of around 70m above sea level from the Asan Mountains on the border between Tokushima and Kagawa Prefecture, the south side of the sacred site is located. In the year 815, Kobo Daishi sensed Dainichi Nyorai in this area, and it was called Dainichi Temple and he carved a statue of Daiichi Nyorai with the reverent process of praying three times before carving once. The statue is very small (1 eighth of the width of a thumb). In the 2nd year of the Saga Genroku era “Shikoku Henrei Sacred Sites” (Nenmoto 1631-1701), it was written that although the magnificent pagoda was built, it became ruined over the passage of time. After that, it was written in the 18th year of Awa History (1815) that a person named Matsuhoshi had a prophecy and repaired it in the years of the Ouei era (1394-1428). After that, it was devastated again. Tokushima’s second-generation owner, Tadahide Hachisuka, donated timber in 1649 and built the main hall, Ichiyu, until Tenwa era (1681) and Joukyou era (1688) The site is still being restored.
After the 5th year of the Genroku era, the 11th generation Lord Hachisuka Tsunanori repaired the temple in 1799. In addition, this area is surrounded by mountains on three sides and is called Kuroya, so it is sometimes called “Kuroyaji” by locals. The origin of the third cause, Mt. Kurosu, is also attributed to the current status. It is currently the end temple of Toji Temple in Kyoto, up until the 20th year of the Meiji era. Before that, it belonged to the Shingon Buddhism Omuro school. A temple crest with sixteen chrysanthemums can be seen on the monastery (house wall) tiles and at the open space at the entrance.

Seated wooden Dainichi Nyorai statue (height 56cm, seat depth 32.7cm)
It is a deity that is usually guarded as a secret Buddha and has never been opened in the past.
It is believed that it was founded in 1407 as evidenced in ink markings behind the statue knee.

The era of construction is 1649 according to the building’s ridgepole. Restoration to the all is found to the ridgepole, Keian era 11th year (1799). The design of the building is based on the Japanese style, but it is an eclectic style building with a mixture of Zen sect styles, such as poles and mirror ceilings. It is valuable as having the form of the Buddhist main hall, and the crest of the Hachisuka family (Maru ni 卍) is also seen in other places where you can see the height of such a formal style.

Established in September 1863 (Bunkyuu era 3rd year) in Daishido preaching documents and temple biography, the style is considered from the end of the Edo period.

The wooden blue-faced Kongo-son statue is enshrined in a “zushi” (miniature shrine with double doors to store holy items), and this zushi is shown to be a donation from a person of Tamba country (now part of central Kyoto) in 1812.

It was established in the Edo period as a memorial to the millionth reading of the Koumyou Shingon (Mantra of Light).

It is said that the wash basin made by hollowing out the sandstone of the Temizuya was dedicated in 1822. In the past, it used to draw spring water, but it was cloudy, so it was called “hamaguri mizu” (clam water/ sea water).

The existing ridges of the west side of the pond are believed to be the same as those described in the “Shikoku Henraku Tourist Association” of 1800.